Global comedy superstar Russell Peters returns to Abu Dhabi on Friday 17th September at the newly opened Etihad Arena on Yas Island. Brought to you by GME Events, in conjunction with The Department of Culture and Tourism – Abu Dhabi (DCT Abu Dhabi), and Yas Island, Abu Dhabi’s leading entertainment hub. “I haven’t been to Abu Dhabi since 2013 and this show will be my first international date since Covid. So I’m excited on so many levels and can’t wait to be back!” says Peters. Peters has set attendance and sales records during his previous appearances in the UAE and is a regional favourite with his keen observations on race and culture. 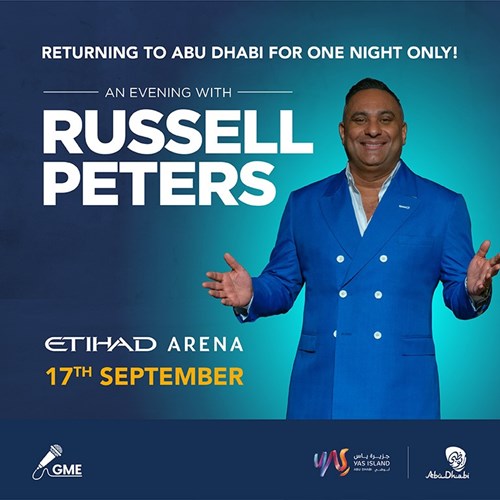 Russell Peters was recently named as one of Rolling Stone’s 50 Best Comics Of All Time. He started doing stand-up at the age of nineteen in Toronto, Canada and has since set attendance records at venues from Madison Square Garden to The Sydney Opera House to London’s O2 Arena where he broke the UK attendance record for the highest number of tickets sold for an individual comedy show. In 2013, Russell became the first comedian to create a Netflix Comedy Special. He has also recently launched his own Podcast, “Culturally Cancelled” and is currently developing a number of TV series as well as appearing in Clifford The Big Red Dog from Paramount Pictures this fall.

The event will be held at Etihad Arena, Yas Island on July 16. Tickets available now from www.etihadarena.ae, ticket prices start from AED 195.